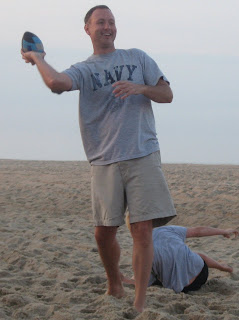 Brian Burke is the founder and lead analyst for Advanced Football Analytics.

After spending 15 years in the Navy, most of them as an F/A-18 carrier pilot, Brian has taken up the less dangerous endeavor of advanced analytics for NFL football. He founded AFA in 2006 as an outlet for innovative ideas about football analysis. The site quickly became a favorite resource for fans and media, known best for clear and simple explanations of complex subjects. By 2009 Brian's analysis became a regular feature in the New York Times.  In 2010, AFA began informal consulting for NFL teams, and in 2011 began formal consulting for multiple teams and media outlets.

Originally from Baltimore, Brian spent his youth either on the sidelines of Maryland Terrapin football games or in his dad's 50-yard line seats at Colts games. His own playing career topped out playing tight end for the Towson High Generals. Brian's only college football experience was playing in the Naval Academy's annual "2.7" game, an annual intramural game that pitted the "geeks" vs "rocks," each team divided by the Academy's average GPA. You can guess which team Brian played for.

After graduating from the U.S. Naval Academy with the Class of '93, Brian attended flight school and went on to fly the F/A-18C Hornet until leaving the Navy. Between flying assignments he attended the Naval Postgraduate School and returned to Annapolis as an instructor. Brian flew numerous combat missions and was awarded the Air Medal, the Navy Commendation Medal, and numerous other personal and unit commendations.

Brian then worked for a defense contractor, serving as a strategy and tactics expert and then as a business unit director before launching Advanced Football Analytics. When not analyzing football, Brian is studying for a degree in operations research and competes in triathlons. He now resides with his family in Reston, Virginia, just outside Washington, D.C.

For Teams, Media, and Fans

Learn more about how analytics can give you the edge. Take advantage of the innovative new ways to squeeze the most out of every play. Find out how advanced analysis can help decision-makers at all levels make the right calls.