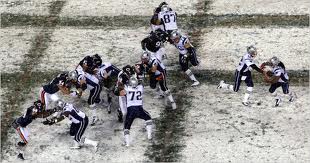 My last post looked at the effect of temperature on home field advantage. We saw that cold weather put dome and warm climate teams at a disadvantage. The post was titled How Does Temperature Affect Road Teams?, but I really didn't answer that question. I measured the size of the effect, but I didn't solve the riddle of actually how temperature makes a difference. This post will begin to look at just how weather makes a difference, starting with the passing game.

Here's how passing fares for home and visiting teams by temperature. The chart below shows  Adjusted net Yards Per Attempt (AYPA), which accounts for sacks and interceptions, according to temperature. Keep in mind there are smaller sample sizes at the extremes.

Home teams have an advantage across the temperature spectrum, which appears to be exaggerated at extreme temperatures. This chart included playoff games. In the last post, commenter Matt pointed out that very cold games are disproportionately playoff games, which would bias the numbers in favor of home teams. This bias is due to the fact that better teams are usually seeded higher and therefore usually at home. I removed playoff teams and the difference between home and visitor AYPA below 30 degrees is actually slightly bigger. The visitor AYPA is virtually the same, but the home AYPA is about 0.2 or 0.3 yards per attempt higher than this chart above shows.

The big takeaway should be that temperature does in fact hurt the passing game. Does it hurt dome and warm climate teams more than others? The chart below tells the tale. It's noisier than we'd like, but one thing we can tell is that the colder the weather the lower the passing efficiency for all types of team climates. Keep in mind there are very few games in the extreme bins, only a total of 36 games in the 11-20 degree bin, and only 15 games in the 91-100 bin.

I wouldn't be too quick to dismiss the drop off in passing numbers in the 91+ degree bin. It's not statistically significant, but with more data it may appear to be a real effect.

I always thought that it was really wind that affected the passing game the most, and not temperature. They often go hand-in-hand in places like Chicago, Cleveland, and Buffalo, so it's difficult to parse them apart. Here is AYPA according to wind speed. It's actually the minimum wind speed reported in the official gamebook. Often, the gamebook will report winds as something like 10-15 mph, or 10 gusts to 15. In this case, I took '10' as the wind speed.

Wind certainly has an effect. Let's take a look at how it affects visiting teams by climate type. Are dome teams victimized as much as we'd expect?

Nope. It looks like the dome teams aren't affected any worse than the other teams. We can safely conclude that it's the temperature and not the wind that causes the dome at cold effect. Wind appears to be an equal-opportunity hazard.

So do teams adjust for the weather conditions. Do they bias their play selection toward the run in cold conditions, as they should?

Yes, they do tilt more toward the run in cold weather, but very slightly. The bigger effect is that there are fewer plays of both types. I suppose more runs means less plays overall because they tend to use more time. Perhaps there are more punts and field goal attempts because passing effectiveness drops.

How does wind affect play calling?

Teams are definitely leaning to the run on windy days, but the effect is only prominent in significantly windy conditions, greater than 15 mph. And even in winds of over 20 mph, offenses are trading only about 5 passes for runs in an entire game, or about 2-3 per team.